Pat offers mothur and R workshops through Riffomonas Professional Development. Learn more!
Edit this page Ask question about or comment on this page

The weighted unifrac algorithm is implemented within mothur as the unifrac.weighted command. The algorithm represents an attempt to make a quantitative beta diversity measurement that can be seen as an extension of unweighted UniFrac . Lozupone et al. (2006) have shown that it is beneficial to apply both quantitative (weighted UniFrac) and qualitative (unweighted UniFrac) measures to a data set as they can lead to different conclusions about the similarity of microbial communities and what factors are driving microbial biodiversity. As shown by Schloss (2008) , this is not a reliable approach to measuring similarity; it is best used for hypothesis testing.

The image below illustrates the calculation of weighted UniFrac when applied to two microbial communities identified by red squares and green circles. Branches are weighted to account for the relative proportion of sequences from each community that descend from the branch. The branches colored purple are those that lead to non-zero values in the numerator. To account for varying rates of evolution between sequences, the weighted UniFrac measure is normalized such that each sequence contributes equally to the distance calculated. 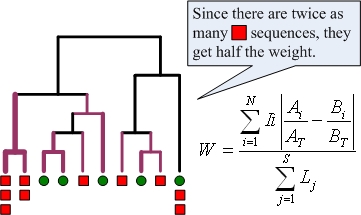